Low Level Laser Therapy (LLLT) can help relieve the symptoms of polymyalgia rheumatica. Chronic pain is reduced by cold laser treatment according to studies. Find out more about LLLT.

Can chronic pain from polymyalgia rheumatica be relieved by Low Level Laser Therapy (LLLT)? Chronic pain is defined as any pain that lasts or persists in 12 weeks or more. Such long-term pain is experienced by people suffering from PMR. Pain and stiffness in the neck, shoulders and arms are the most common symptoms of polymyalgia. The onset of pain may be sudden or gradual but it can last for months and years.

Polymylagia is debilitating, especially because it typically occurs in people who are over 50 years old. Many PMR sufferers, who are mostly female and elderly, complain of severe pain. Male and those under  50 patients have also been reported to develop PMR. Usually symptoms of polymyalgia are detected but in a later stage, giant cell arteritis is also diagnosed along with PMR. Similar to arthritis and other autoimmune diseases, the painful symptoms are worse in the morning. Simple household activities are hard to carry out because of pain and stiffness.

Laser as Medical Treatment for PMR 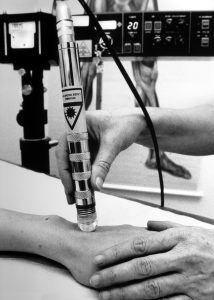 Laser treatment dates back to 1916 when Albert Einstein discovered laser. Laser is actually an acronym that for “Light Amplification by Stimulated Emission of Radiation.” However, the use of low power laser as a medical treatment only began in 1967 by Hungarian physician Dr.  Endre Mester. He was later named as the grandfather of laser therapy.

The idea of using Low Level Laser Therapy to relieve pain is because of the fact that the body has a natural way of healing itself. However, self-healing can only happen through its cell. The cell is the most basic unit of the body. Every tissue, organ, and system in our body start with the cell. Therefore, LLLT starts with stimulating the cells so that it can heal the body. It can be an alternative polymyalgia treatment.

This is backed by clinical studies as early as 1998 to 2014 which showed that LLLT may have an analgesic effect on chronic pain. Although its mechanism has not been completely explained. A Lea, et al (2014) in a double blinded placebo reported a decrease in pain and increase in mobility and functionality in patients with knee pain. A pain practitioner, Bernard E. Filner, MD had utilized Low-Level Laser Therapy in his 29 years of treating patients with chronic pain. Dr. Filner said, “ I have found the use of LLLT to be most gratifying in the treatment of patients with fibromyalgia.”  Fibromyalgia and polymyalgia have both painful flares. If LLLT worked well on fibromyalgia patients, it may also relieve PMR sufferers.

LLLT is also known as Cold Laser Therapy. It uses laser light placed exactly over the area with pain. The device which is only flashlight size emits specific wavelengths of light to penetrate about 2 to 5 cm through the layers of the skin. A wavelength power of 830 or 940 nm has been reported to have a moderate effect on pain. But the studies are not completely conclusive as efficacy may depend on several other factors.

Class 3B for LLT

Not all types of lasers can be used to help chronic pain relief. The Food & Drugs Administration (FDA) classified medical laser treatment into 3 types: Class 4 Surgical Lasers, Class 3B Non-surgical Lasers, and Class 3A Low-Level Lasers. Class 3B and Class 3A are used in non-invasive treatments. In relation to chronic pain treatment, only Class 3B is able to penetrate and help in the healing process of deep tissue and joint pains.

Self Healing of the Body

This laser therapy stimulates all types of cells.There are about 200 cell types in our body including the musculoskeletal cell system which is responsible for our movements and body support. When laser lights are directed to the pain areas, the muscle cells will start to heal and pain will be reduced. According to studies, a number of conditions merited from low laser treatment. It can be an alternative cure for rheumatoid arthritis, carpal tunnel syndrome, fibromyalgia, back pain, knee pain, tendonitis, neck pain and others. The first three diseases mentioned are autoimmune diseases just like polymyalgia rheumatica. There have also been testimonies and positive feedback about LLLT from PMR patients in social media.

Cold laser therapy or LLLT is a non-invasive laser therapy procedure so recovery time after the sessions is not prolonged. No medications prior to undergoing LLLT is required. Many PMR patients try to do away with additional medicines to take as there can be side effects. Also, studies revealed that there are no adverse side effects of LLLT to any patient if laser device is used properly by a licensed doctor.

However, relief doesn’t happen overnight. Patients have to undergo therapy sessions at least 2 times a week, and a series of treatments of 8 to 30 sessions. Yet these again depend on how severe your pain and conditions are.

How much is the cost of LLLT for polymyalgia treatment? On the average, the cost for each session is about $25 to $200. It can be pricey and many insurance companies may not cover your expenses for the treatment. So before thinking about having low-level laser therapy, check with your insurance company first.

How Cannabis Can Get You Off Painful Polymyalgia 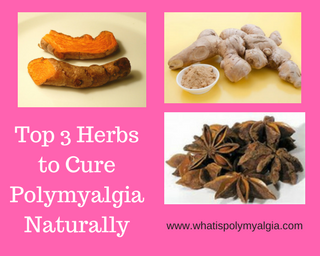